These circuits don’t have memory and the output depends only on inputs provided. Combinational circuit is a logic circuit containing only logic gates.

To change the type of gate, such as changing OR to AND, you must do three things ,

Any function can be implemented with the help of these (NAND, NOR) gates.

This is an AND gate with the output inverted or we can say (AND + NOT). Therefore, the output expression of the two input NAND gate is X = (A . B)’.

Other Types of Gates

The XOR gate provides 1 as an output only if its two inputs are different. If the inputs are same, the output will be a ‘0’. Unlike

standard OR / NOR and AND / NAND functions the XOR function always has exactly two inputs.

If A and B are different, then the output will be high.

Exclusive NOR (EX- NOR / XNOR) Gate

If A and B are different, then the output will be low or zero.

Substituting one Type of Gate for Another

Any Logic Gate can be built from NAND or

NAND or NOR gates can be combined to create any type of gate. This  enables a circuit to be built from just one type of gate, either NAND or NOR. e.g, an AND gate is a NAND gate, then a NOT gate (to undo the inverting function).

Addition of 2 binary digits requires 2 inputs and 2 outputs, one for result and one for carry. 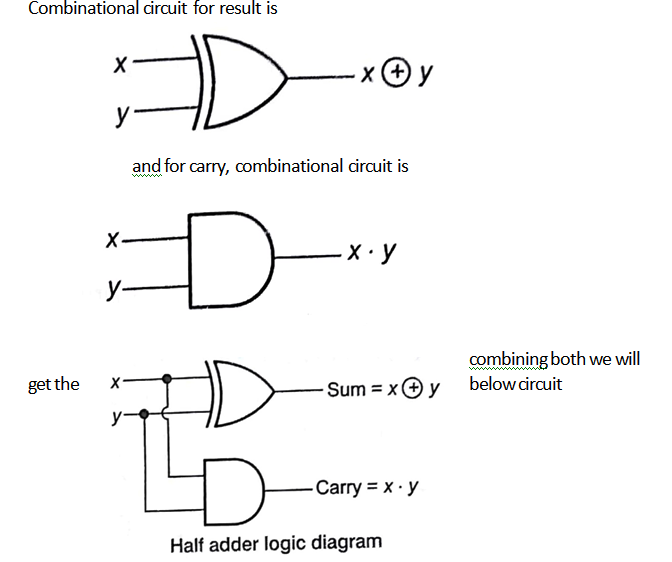 A full adder is a combinational circuit that forms the arithmetic sum of 3 input bits. It consists of 3 inputs and 2 outputs. Two of the input variables are the 2 significant bits to be added. The 3 rd input represents the carry from previous lower significant position.

A decoder is a combinational circuit that converts binary information from n input lines of a maximum of 2″ unique output lines. If the n bit decoded information has unused or don’t care combinations, the decoded output will have less than 2″ outputs. The decoders are also called as n to m line

This decoder takes binary values as input and produces decimal value output. Suppose, if D3 is high it means the binary combination of 3 that; 011, means x = 0, y = land z = 1. 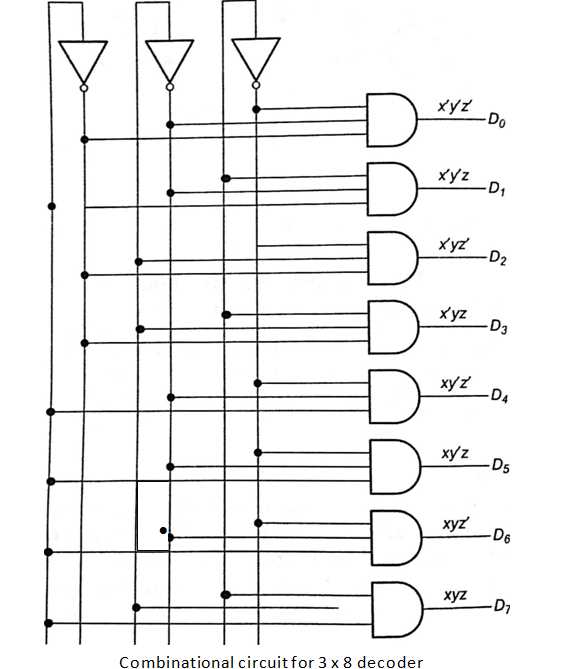 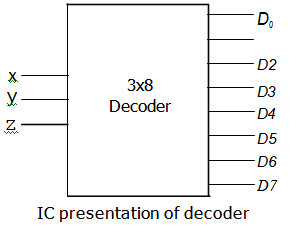 An encoder is a digital function that produces a reverse operations from to a decoder. An encoder has 2 (or less) input lines and n output lines. The output lines generate the binary code for 2″ input variables,

From the above truth table, we get

Sorting in Design and Analysis of Algorithm Study Notes with Example

2019-12-25
Previous Post: Appendix of CS and IT in Cyber Programming Tutorial
Next Post: Concept and Rules of Karnaugh Map Tutorial with Examples