The following is an example of a schedule

Classification of Schedules Based on Serializability

The schedules  can be classified as

A schedule that contains either a commit or an abort action for each transaction.

Note: Consequently, a complete schedule wilt not contain any active transaction at the end of the schedule.

Non-serial schedules are interleaved schedules and these schedules improve performance of system (i.e., throughput and response concurrence or interleaving operations in schedules might lead the database to an inconsistent state.

We need to seek to identify schedules that are

Conflicting Operations: When two or more transactions in a schedule execute concurrently, then there may be some operations.

Two operations are said to be conflicting, if they satisfy all of the following conditions.

The following set of operations is conflicting

While the following sets of operations are not conflicting

There are Two types of serializable schedule

The schedules S1 and S2 are said to be conflict equivalent, if the following conditions are satisfied

Testing for Conflict Serializability of a Schedule

There is a simple algorithm that can be used to test a schedule for conflict serializability, This algorithm constructs a precedence graph (or serialization graph), which is a directed graph.

A Precedence e graph for a schedule S contains. 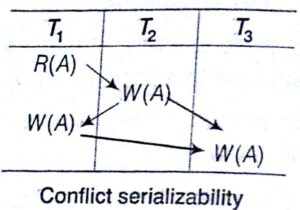 A schedule S is conflict serializable if and only if its precedence graphs is acyclic.

The schedule is a correct schedule, if

It will leave the database in a consistent state and the interleaving is appropriate and I will result in a state as if the transaction were serially executed.

A schedule is a efficient (interleaved) schedule.

A schedule is view serializable, if it is view equivalent to some serial schedule.

Classification of Schedules Based on Recoverability

Once a transaction T is committed, it should never be necessary to rollback T. The Schedules under this criteria are called recoverable schedules and  those do not, are called non-recoverable.

A schedule S is recoverable, if no transaction T in S commits until all transactions T’, that have written an item that T reads, have committed.

(This schedule is not recoverable because T2 made a dirty read and committed before T1, T1 should have committed first.)

The above given schedule is non-recoverable because when the recovery manager rolls back T1 transaction, then X gets its initial value before updation. But T2 has already utilized the wrong value of X that was updated by T1 and T2 committed. Now, database is consequently in an inconsistent state. 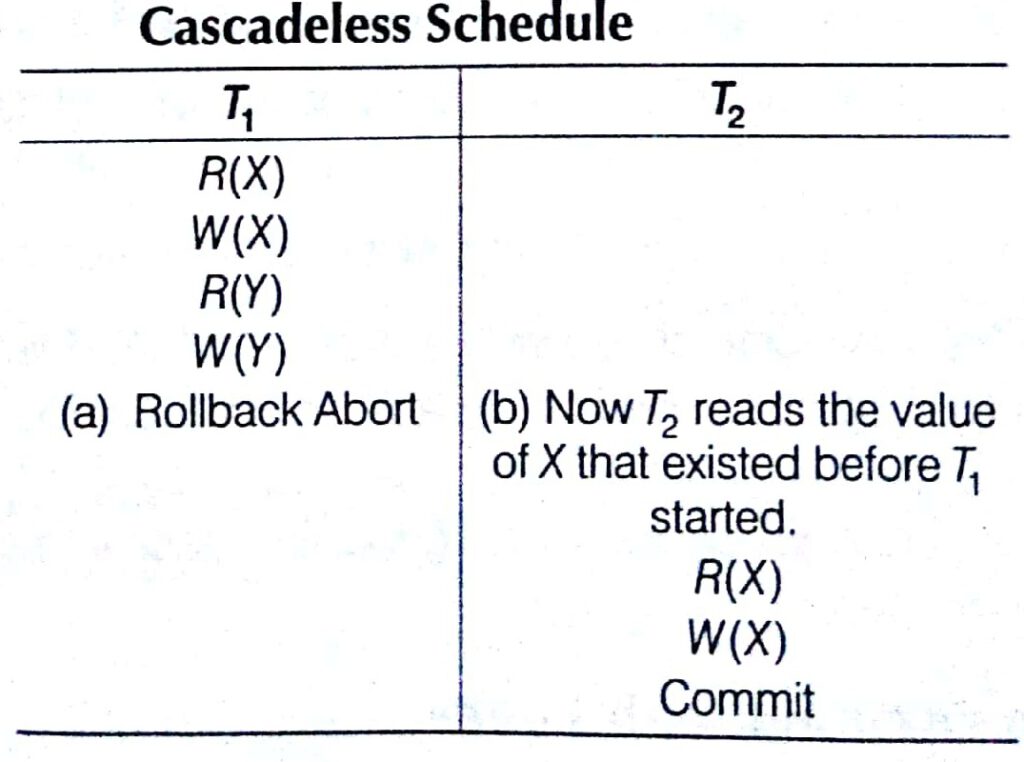 A schedule is strict,

(i)Ti reads a data item X after Tj has terminated (aborted or committed).

A lock is a variable associated with a data item, that describes the status of  the item with respect to possible operations that can be applied to it. (e.g., read lock, write lock). Locks are used as means of synchronizing the access by concurrent transactions to the database items. There is one lock per database item.

Deadlock :Two or more competing transactions are waiting  for each other  to complete to obtain a missing lock.

Starvation: A transaction is continually denying the access to a given data item,

Purpose Of Concurrency Control With Locking

Locking is an operation that secures

Lock (X): Data item X is locked on behalf of the requesting transaction. Unlocking is an operation which removes these permissions from the data item.

Unlock (X): Data item X is made available to all other transaction,

The two types of Locks are given below

A binary lock has two states

If a database item X is locked, then X cannot be accessed by any other database operation.

There are three states

Note: Using binary locks or read/write lock, in transactions, does not guarantee serializability of schedules on its own.

A transaction is said  to follow the two-phase locking protocol, if all Locking operation precede the first unlock operation in the transaction.
Such a transaction can be divided into two phases.

Expanding or Growing Phase: During which new locks on items can be acquired but none can be released.

Basic 2PL (2 Phase Locking): Transaction locks data items incrementally. This may cause the problem of deadlock.

Conservative 2PL (Static 2PL): Prevents deadlock by locking all desired data items before transaction begins execution. However, it is difficult to use in practice because of the need to predeclare the read-set and write-set, which is not possible in most situations.

Strict 2PL : A more stricter version of basic algorithm, where unlocking of write lock is performed after a transaction terminates (commits or aborts and rolled back). Hence, no other transaction can read or write an item that is written by transaction.

Rigorous 2PL: Strict 2PL is not deadlock free. A more restrictive variation of strict 2PL, is rigorous 2PL, which also guarantees strict schedule. In this variation, a transaction does not release any of its locks (exclusive or shared) until after it commits or aborts.

A deadlock is a condition in which two or move transaction are waiting for each other deadlock (T1 and T2). An example is given below

A transaction locks all data items, it refers to before it begins execution. This way of locking prevents deadlock, since a transaction never waits for a Data item. The conservative two-phase locking uses this approach.

In this approach, deadlocks are allowed to happen. The scheduler maintains a wait-for-graph for detecting cycle. If a cycle exists, then one transaction involved in the cycle is selected (victim) and rolled back.

There are many variations of two-phase locking algorithm. Some avoid deadlock- by not lefting the cycle to complete. This is as soon as the algorithm discovers that blocking a transaction is likely to create a cycle, it rolls back the transaction.

Starvation occurs when a particular transaction consistently waits or restarted and never gets a chance to proceed further. In a deadlock resolution scheme, it is possible that the same transaction may consistently be selected as victim and rolled back.

This is a different approach that guarantees serializability involves using transaction time-stamps to order transaction execution for an equivalent Serial schedule.

A time-stamp is a unique identifier created by the DBMS to identify a transaction. 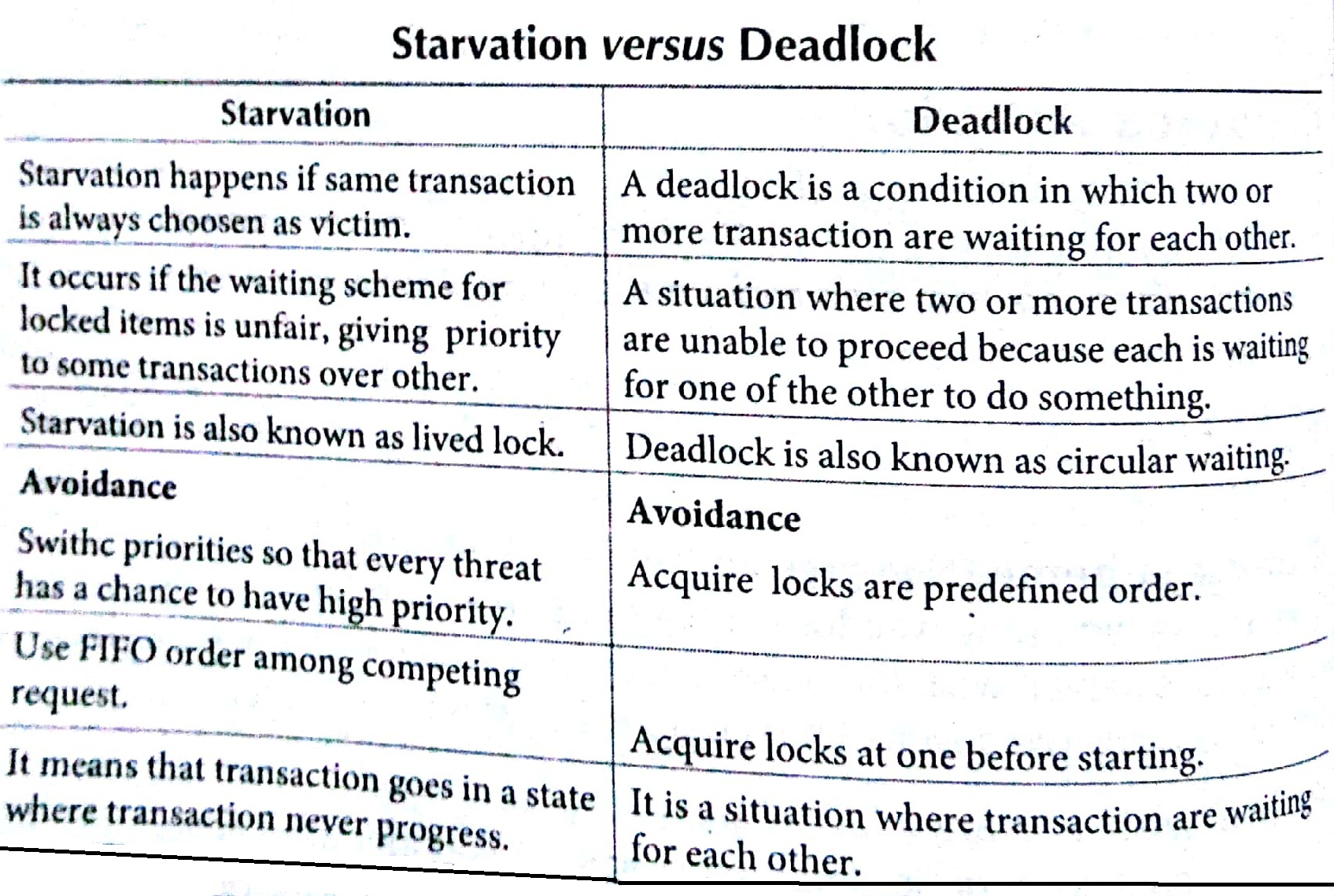 The read time stamp of item X; this is the largest time-stamp among time-stamps of transactions that have successfully read item X.

The write time-stamp of item X ; this is the largest time-stamp among all the time-stamps of transactions that have successfully written item X. There are two Time-Stamp based Concurrency Control Algorithm

The concurrency control algorithm must check whether conflicting operations violate the time-stamp ordering in the following two cases.

If read TS (X) > TS (T) or if write TS (X) > TS (T), then an younger transaction has already read the data item, so abort and roll back T and reject the operation.

If the condition in above part does not exist, then execute W(X) of T and set write TS (X)  to TS (T).

if write_TS (x) > TS (T), then an younger transaction has already written to the data item, so abort and rollback T and reject the operation.

Delay T until the transaction T’ that wrote or read X has terminated committed or aborted.

Delay T until the transaction T’ that wrote or read X has terminated committed or aborted.

This approach maintains a number of versions of a data item and the allocates the right version to a read operation of a transaction, Thus, unlike other mechanisms a read operation in this mechanism is never rejected,

In this, execution of transaction Ti is done in three phases.

Validation Phase Transaction 7; performs a validation test to determine, if local variables can be written without violating serializability.

Write Phase If 7; is validated, the updates are applied to the database. otherwise Ti is rolled back.

Each transaction Ti; has three time-stamps

Start (Ti) The time when 7; started its execution.

Validation (Ti) The time when 7; entered its validation phase.

Finish (Ti) The time when 7; finished its write phase.

Serializability order is determined by time-stamp given at validation time to) increase concurrency. Thus, TS (Ti) is given the value of validation (T). For all Tj with TS (Ti) < TS (Ti) either one of the following conditions holds

Coarse Granularity: The larger the data item size, the lower the degree of concurrency.

Fine Granularity The smaller the data item size, the more locks to be managed and stored and the more lock/unlock operations needed.

Sorting in Design and Analysis of Algorithm Study Notes with Example